Home Articles What Are Dovetail Joints 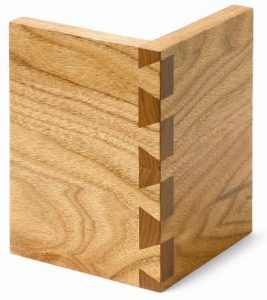 Dovetail joints are a common technique in woodworking used to join two pieces of wood to each other. The joint is well known for its strength and the fact that it does not need any mechanical fasteners, like screws, in order to fasten the wood together. Instead of using a fastener, the two pieces of wood to be joined together are cut into mating shapes. The “fingers” that join the boards together are commonly called pins and tails. The pins are on one board while the tails are on the opposite board. Quite commonly the pins and tails are in a trapezoid shape, although that is not always the case. Sometimes dovetail joints are made with rectangular pins and tails since it is easier to cut those with a dovetail saw. Watch a video of cutting dovetails by hand below.

The use of dovetailing wood in order to join it together has been used for thousands of years. Examples of dove tail joints can be seen on old wooden houses as well as the furniture inside of ancient Egyptian tombs. The great benefit of these joints is their great strength, especially when in tension. When glue is added to the joint it will become even stronger because of the added surface area that the glue will bond to.

There are five different types of dovetail joints:

The most commonly used dovetails are the through, half-blind, secret mitered, and sliding dovetails. Dovetails are most commonly found in box making and cabinetry. While the secret mitered dovetail is common for the faces of cabinets, the sliding dovetail is used for joining cabinet sides to the bottoms and shelves to the sides of the cabinets. Dovetails are very popular due to the look they give a project. Most customers and non-woodworkers see dovetails as complex joinery and are something that are highly desired in a piece of furniture. 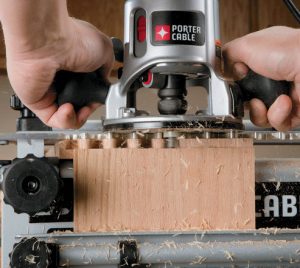 Dovetail joints can be difficult to make by hand given their trapezoidal shape. A band saw and an angled platform can be used to create the pins and tails or a dovetail saw as mentioned earlier, however, it is more common to use a dovetail jig along with a dovetail router bit on a handheld router. Unless you want the bragging rights of being able to tell everyone you made the dovetails by hand, I would highly recommend that you use a dovetail jig to cut the dovetails. It is painstakingly slow to cut them by hand and can involve a lot of trimming and sanding to make them fit perfectly. Cutting dovetails by hand is also a very slow process. If you have to cut 4-5, then it might not be a big deal for you, however, if you need to cut 20-30 dovetails in a piece of wood, then this could take you a very long time. The dovetail jig is an expensive piece of machinery, so you probably don’t want to invest in one unless you plan on constructing a lot of cabinetry or you can justify the expense. A jig will be a huge time saver any way you look at it. Saving time cutting the dovetails in the first place, and knowing that all of your dovetails will be cut perfectly and fit together every single time is hard to argue against.

No matter what method you use to cut dovetails, I promise the added detail will be a great addition to any of your cabinets and furniture. The added design detail and appealing look that dovetails provide impress people when they are looking at your furniture whether it is in admiration or they are the customer hoping to purchase your projects. 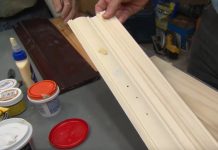 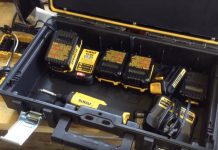 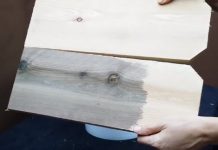 How to Age Wood with Vinegar in 9 Easy Steps